Queen City Gallery is proud to announce a new group exhibit, opening August First Friday, in the Downtown Market Arcade. The name and theme for the exhibit, “RELATED” has been in the back of the lead artist’s mind for many years, and fate has now brought two Buffalo artist exiles back to the city, allowing the convergence of “stars” and talent, at least for a short 2 week burst. Brother, sister and 2 cousins are related by blood, and a desire to make art. 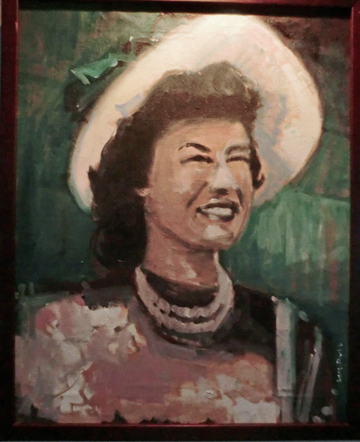 Portrait of Jeanette by Jerry Ross

The lead artist, Jerry Ross, is best known in Buffalo as a political activist, and as an member of the Buffalo Nine. But everywhere else he is known for his rich and mature oil palette, winning European and local ( Eugene, Oregon) awards for his landscapes and portraits, which are heavily influenced by Italian Impressionists, and almost annual trips to Italy. He has made "macchia" , a central concept to the I Macchiaioli, his jumping off point. Ideas of painters during the Risorgimento in Italy, especially the Garibaldini, are his passion. Jerry instigated the POEM (Post office to Eugene Museum) effort, and he also helped the city’s alternative art space DIVA get started and stay vibrant. Although smaller works are being displayed at Queen City Gallery, Jerry also paints very large canvases. He has a devoted following in Oregon and the west. More details...

His younger sister, Diane Bush, may be more familiar to the baby boomers of Buffalo. After training (studio photography) in the UK, Diane returned to Buffalo to teach photography (Villa), start a Public Art Organization (The Urban Art Project) and contribute to the vintage clothes scene via her alter ego, Fifi. A marriage to Steven Baskin, idea man and vintage cohort, made the picture complete, as they collaborate with each other to throw barbs at the political environment, using photography, sound, fabric, and video. Diane, who traded Buffalo for Las Vegas in 1997, is currently working on completion of a USA Artists Foundation Project , called “The Big Cover Up”, and her “Im-BLEACHed photo blanket of Mitt Romney is on display at the Gallery.

Mick Grosz, a first cousin of Jerry and Diane’s has been painting for the past about 10 years, using acrylics, blood, dirt, house paint, and whatever is available. His artistic vision has been heavily influenced by mid-century furniture and clothing design through his business as a mid-mod artifact dealer . He has dabbled in writing and collaborated on short films as well as performance art. across. Using a tried and true method by self taught artists, Mick uses influences of the artists he admires, and then adds his own personal touch. Mick exhibits and sells his work when it suits him.

The youngest of the group is second cousin, Natalie Korchowsky. Natalie recently graduated with a BA in Studio Art from the State Univerisity at Buffalo , and is currently perfecting her style by revisiting scenes from her Italian experiences, studying abroad in Florence. Through the experimentation of various medium such as oil paint, pastel and charcoal, Natalie enjoys rendering her observations of the realistic world.