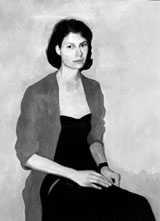 Below: There is also a series of his paintings that are re-creations of historical works  but in a more abstracted, less detailed style. This one is called ''Battle.''

Above: ''The War Widow'' by Jerry Ross, an example of his portrait style, is one of the paintings in an exhibit of Ross's work now showing at DIVA in downtown Eugene.

By Bob Keefer
The Register-Guard

Over the past few years, Eugene painter Jerry Ross has been working on a number of artistic fronts at the same time:

 He's a landscape painter, turning out accomplished scenes from Oregon and from Italy, where he's fond of traveling.

 He's an elegant portrait painter, creating the kinds of portraits that are artistically interesting even if you don't happen to know the subject.

 And he's been busily reinterpreting European painting from the Renaissance forward, creating a series of sketchy but oddly compelling re-creations of work by painters such as the 16th century's Veronese and the 19th century's Umberto Coromaldi.

Work from all three of Ross' artistic incarnations can be seen through June at DIVA, which has mounted a show called ``New and Retrospective Work.''

That could be seen as nothing more than a polite way of saying a show of whatever the artist happens to have hanging around unsold. Let's be charitable and see it as a snapshot of a midcareer artist at work.

Make no mistake about it: Ross is a very good painter.

His simple, elegant portrait ``La Vedova di Guerra,'' or ``The War Widow,'' absolutely crackles with energy and suppressed melancholy. If Ross never painted anything more than this kind of quiet, introspective portraiture, he would be an artist worth knowing about.

The large, understated painting, which shows a young woman quietly sitting against a blank background, has perfect poise. DIVA has wisely given it a wall of its own next to the entrance to the gallery.

The landscapes are good but a little unchallenging.

"View Toward Hayward Field" looks much like the kind of vaguely impressionist landscape work that's much in vogue and sells well in certain galleries.

More interesting, to my eye, is the oddly titled "Near Brownsville Landscape," with its soft earth-toned palette and sketchy rendering.

Oregon is not, in fact, created entirely in variations of greens and blues, and Ross nicely captures the subtle warmth that lies just behind the Willamette Valley gray sky.

The third group of paintings - the studies of historical work - may take some getting used to, but it's worth getting to know.

In a recent gallery talk, Ross explained that he took up making these studies of historical paintings in order to emulate and learn their technique, just as artists have learned for centuries by copying the masters.

This was a refreshing and straightforward explanation, coming at a time when many artists would have been tempted to use words such as "post-modernism" and "appropriation" to explain a perfectly simple process.

The best of these paintings - they are not literal copies by any means - are composed of large daubs of color, applied roughly to the canvas as though Ross were blocking in a more-realistic work yet to be finished.

But Ross doesn't finish these paintings - you can see bare canvas and even pencil lines showing through - contenting himself with abstracted images that show the power of the old masters' sense of composition and form.

The result is intriguing and has grown on me over the years. Ross has found a thread worth teasing out.

I hope that ultimately he can pull it away from the the Italian past and more toward contemporary Oregon, perhaps weaving all three strands of his work together.

When: Through June 26; noon to 6 p.m., Tuesday through Saturday